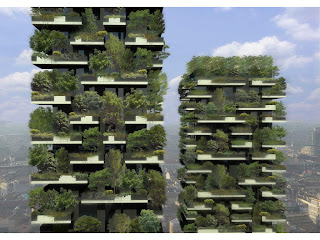 Towers of trees: Vertical forests in the sky are the height of green living


Towering over the city skyline, these are the world's first forest in the sky apartments, complete with a living space that is also your garden. With trees equal to one hectare of forest spanning 27 floors, these 365 and 260-foot emerald, twin towers will be home to an astonishing 730 trees, 5,000 shrubs and 11,000 ground plants. Basking in the north Italian sun, the towers, called the Bosco Verticale, are under construction in the city of Milan - and the plants are being grown in pots while their new home is being prepared. Director of Boeri Studios, Michele Brunello, 35, has been managing the project for his urban design and architecture firm since it was designed in 2006. 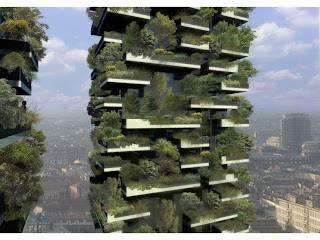 'The idea for a vertical forest came when we were involved in a local tree planting project,' he explained. 'We imaged a building that allowed the landscape to enter it. 'By creating a tower that truly becomes a home for the landscape we have a powerful tool.' Brunello's concept is designed to save on land, which, he said, is a precious resource in the centre of a major city. 'We can provide the quality of life of expensive housing without consuming the resources that conventional housing would demand. 'On top of this we have a building that is a world symbol for sustainable living. 'It's very different from anything that has come before,' said Brunello.  Bosco Verticale has been designed as a home to a variety of plant life, which planners hope will act as a filter to pollution from traffic, shade people from the Mediterranean sun and will change its appearance each season - with new plants coming alive at spring time and rich colours being displayed during autumn. 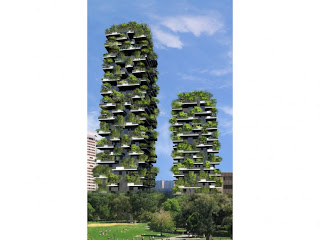 Apartments range in price from £560,000 for a low level 80 square meter apartment to £1.7 million for a 200 square meter penthouse with commanding views of the city. 'The interesting aspect to the way people live with the trees is that they don't own them - they are communal,' said Brunello. 'This means that all the plants have been picked by the designers to be suitable to the height and correct side of the building. 'So the people aren't just choosing an apartment based on the size and view. 'But also they need to consider which trees and plants they will be living with. Safety is also a major factor and Brunello explained: 'If a tree was blown down in the wind from a great height this could be a huge problem. 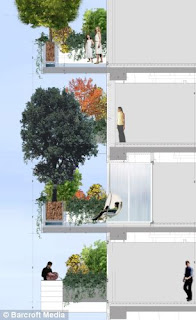 'So we tested various trees in a wind turbine to make sure we had the right ones.' When the sky forest is completed by the end of 2012 the structure will house the same amount of residents as 50,000 square meters of conventional urban sprawl. The towers will not only be home to human residents but to the insects, birds and animals that usually live in the parks of Milan. The towers, which are still under construction, are the brainchild of world renowned Milan architect, 55 year-old Stefano Boeri.


Italian architecture firm Boeri Studio hopes to merge vegetation and urban architecture, with its Bosco Verticale (Vertical Forest) project. The Italian firm has designed a model that could see the "reforestation and naturalization" of metropolitan cities, by growing forests sky-ways. "Bosco Verticale [is a] device for the environmental survival of contemporary European cities," says Stefano Boeri, who worked with Gianandrea Barreca and Giovanni La Varra on the project.


Milan will host the first example of Bosco Verticale, with two residential towers already planned for construction. The towers, measuring 110 and 76 meters (361 and 250 feet), will become home to over 900 trees and that's excluding a wide range of shrubs and floral plants. The basic idea is that if you were to take the building out of the picture, the amount of trees needed to plant a forest on the land surface should be equal to those growing vertically on the tower. In essence, you will be creating a 10,000 square meter (11,960 sq. yds.) forest, growing upwards.


The project also aids in filtering air pollution contained in the urban environment. This is achieved as the the plants help produce humidity, absorb CO2 and dust particles, and produce oxygen. This will improve the quality of living for the residents, and it also creates a canopy that protects the building from radiation and noise pollution.


An irrigation and filtering system will be installed, that recycles gray water for maintenance of the plants. Photovoltaic solar cells will help contribute to the building's energy self-sufficiency.


Bosco Verticale will cost EUR65 million (US$87.5 million) and is stage one of the proposed BioMilano, which is hoped to create a green belt around the city.  Source: Boeri Studio


Italian architecture firm Boeri Studio hopes to merge vegetation and urban architecture, with its Bosco Verticale (Vertical Forest) project. The Italian firm has designed a model that could see the "reforestation and naturalization" of metropolitan cities, by growing forests sky-ways. "Bosco Verticale [is a] device for the environmental survival of contemporary European cities," says Stefano Boeri, who worked with Gianandrea Barreca and Giovanni La Varra on the project.


The Bosco Verticale is a system that optimizes, recuperates, and produces energy. Covered in plant life, the building aids in balancing the microclimate and in filtering the dust particles contained in the urban environment (Milan is one of the most polluted cities in Europe). The diversity of the plants and their characteristics produce humidity, absorb CO2 and dust particles, producing oxygen and protect the building from radiation and acoustic pollution. This not only improves the quality of living spaces, but gives way to dramatic energy savings year round.


Each apartment in the building will have a balcony planted with trees that are able to respond to the city’s weather — shade will be provided within the summer, while also filtering city pollution; and in the winter the bare trees will allow sunlight to permeate through the spaces. Plant irrigation will be supported through the filtering and reuse of the greywater produced by the building. Additionally, Aeolian and photovoltaic energy systems will further promote the tower’s self-sufficiency. The design of the Bosco Verticale is a response to both urban sprawl and the disappearance of nature from our lives and on the landscape. The architect notes that if the units were to be constructed unstacked as stand-alone units across a single surface, the project would require 50,000 square meters of land, and 10,000 square meters of woodland. Bosco Verticale is the first offer in his proposed BioMilano, which envisions a green belt created around the city to incorporate 60 abandoned farms on the outskirts of the city to be revitalized for community use.